Those were my thoughts when I flew to Singapore for the 2-day TAUS Asia Congress. I wanted to have confirmed (or refuted) what was reported in the domestic media. How this turned out? Find out in this blog.

When you get out of the plane and see Singapore for the first time, you can see the potential of this region. In Singapore, everything simply works almost perfectly, local transport, street cleaning, wireless networks. That has its price, of course: strict laws, video surveillance, police presence and expensive goods. Those who do not abide by the rules in Singapore end up in prison or worse, even with minor offences. And if you don’t have a highly paid job, it’s much harder to make ends meet. In Singapore, the state intervenes in much of what is private space for us Europeans. But it also supports young companies and promotes economic growth. Extremes we don’t know about in Germany.

The translation business in Singapore is small due to the small size of the city state and is distributed among a few translation agencies. After all, Singapore has four official languages: English, Mandarin, Malay and Tamil. Singlish – a Creole language based on English with influences from Malay, Mandarin and Tamil – is only spoken by ‚real‘ Singaporeans, is outlawed by the government as a pidgin and is not recognized as a national language. 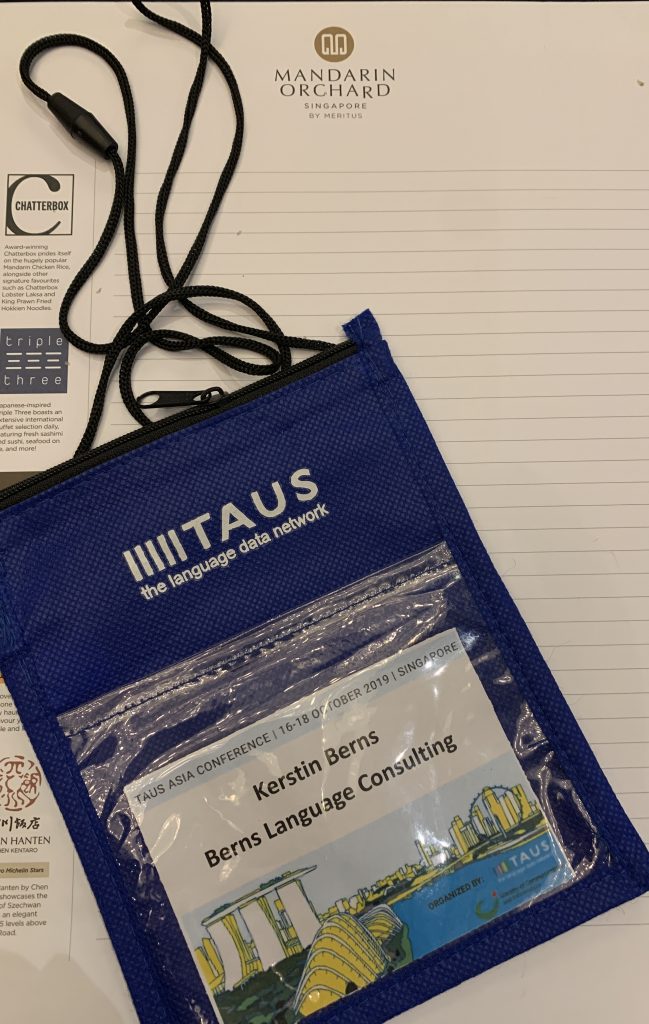 But back to the TAUS conference: From 16.-18.10. I was allowed to listen to exciting lectures, panel discussions and good speakers at the Mandarin Orchard Hotel, in the middle of Singapore on the lively Orchard Road. But the most exciting thing was networking with the representatives of international companies and translation agencies in Asia, such as PayPal, Expedia, Skyscanner and many more. Above all, the findings from these conversations have flowed into my blog.

China, Vietnam, it all comes down to Asia

Singapore is not Asia; Asia consists of numerous countries and regions, all with their peculiarities. In my discussions at the conference, it quickly became clear that China holds a special position also from the point of view of the other Asian countries. Logically, since China is huge and the population represents an immense purchasing power.

Somehow I had assumed that in China as a company, e.g. as a translation agency, you get everything very quickly and, above all, very cheaply. No such luck! In China, non-wage labor costs and taxes are extremely high, but the pure wage share itself is low. In addition, there are too few trained specialists and, especially in the language sector, too few trained translators. Since the translation profession is not desirable in the land of the aspiring, you cannot make a career with it. This is also a problem in Vietnam, says Tram Chau, Localization Quality Manager at Expedia. Often the applicants are not trained translators but career changers from other fields.

Many small and few large companies

In addition, Chinese companies often still don’t consider localization to be an important issue, and only the Internet giants Baidu, Alibaba and Tencent have really large translation volumes. Otherwise, there are very many very small companies in China (up to 1,000 new companies are founded in China daily) with small volumes, and many simply serve their own huge market. Chinese translation companies therefore look overseas to offer their services. But there is still a lot to be learned here, says James Wei from the translation company EC Innovations Inc. in his presentation. Intercultural communication is the buzzword: How to deal correctly with customers from other cultures? What do for example Germans expect in case of a complaint?

Chinese companies often use chat-bots and process purchase requests and complaints automatically. In China, this no problem: Here, one is perfectly content with a chat-bot, as long as it happens immediately. Not so with us in Germany. We prefer to wait 12 hours until the telephone hotline is back on duty to talk to a real person in a call center. We believe that the information we receive here is more ‚valuable‘, and it is important to us to express our opinion on the problem or product to a real person.

In Asia, everything is machine-translated or offered in English

Machine translation is something you would like to use (and without hesitation) for everything, but you can’t. This depends on the type of language pairs and, of course, on the amount and quality of the data. Unfortunately, many Asian languages are not well suited for machine translation. And for some (e.g. East Asian languages) there is not enough data material in the required quality. In other words, there is not as much going on in machine translation as it might seem and as everyone always assumes. However, it is already the case that many companies in China advertise their online goods with machine-translated texts in Europe, even if the quality is not sufficient. This is due to the fact that many companies still negate the language problem.

Unfortunately, it is not possible to offer English as a substitute language. In almost all Asian languages, especially in the East Asian countries, you should use one of the national languages if you want to sell your product. English is often not understood there.

I have learned so much more, but to sum up the most important findings: Asia must not be lumped together but must be dealt with individually if you want to gain an economic foothold as a European. In cooperation with Chinese translation service providers, it is advisable to conduct cultural training in order to be able to correctly assess the behaviour of suppliers and business partners. Of course, differences do not have to be negated, we are culturally different and that is completely OK. But you should be able to handle it.

Anyway, I will gladly travel to an Asian country again and hopefully get to know many more of these differences!

ByKerstin Berns
As I mentioned in my very first blog, one aspect that I really enjoy when working in the localization industry is creative translations for marketing and advertisement purposes and their cultural insights. This is also known as transcreation. Transcreation? So what does it consist of and in which sense is that different from translation? And why should those projects be handled in a completely different way? This is what I will dive into in this blog.
general

ByKerstin Berns
One of the first things a foreigner faces when coming to a new country is language. And one of the first things that a non-native speaker observes is that the language native speakers use in everyday life is quite different from the one taught at school or at university. As a linguist I find it exciting to be exposed to a great variety of German language phenomena every day. Idioms is one of them. But why are people using idioms in their everyday speech?
general machine translation terminology
Older Post