It was truly hot – the European Trados User Group 2019 in Düsseldorf. And we as hosts are very happy and even a bit proud that ETUG 2019 was good –  some tend to say very good … 🙂 But one step at a time.

Time and opportunity to network

As we had taken to heart the suggestions from attendees of last year’s ETUG, we decided to extend break times. This opportunity was so actively used that the music we chose to replace the bell from last year in order to lure the attendees back to the conference wasn’t noticed immediately. So it was a very vivid and communicative conference – just as it should be. Further, the attendees were kept active and sharp by morning stretches. 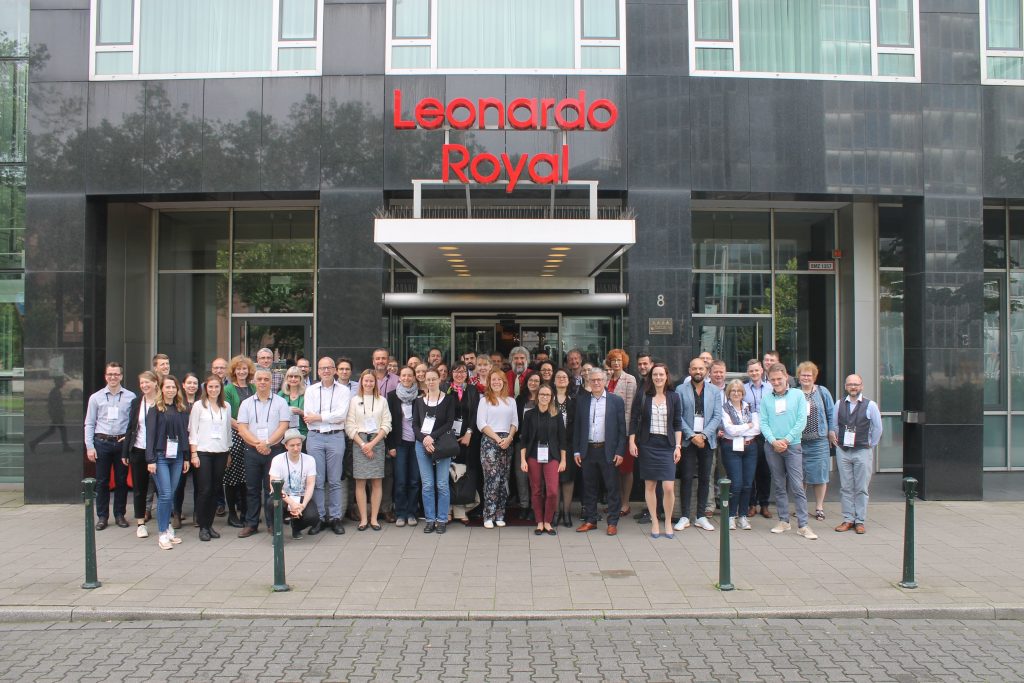 Purely ETUG: many insights into the work of and with SDL

SDL representatives have the floor

Luis Lopez told us about the current status of SDL Cloud Solutions and – very important for the power users in the hall – the SDL road-map. The road-map remained ‘cloudy’ at times but SDL made it very clear that they and their software are moving into the cloud and that local solutions are not being taken into account to the same extent when it comes to new functionality.

Daniel Brockmann and Phil Maieski showed the road-map for SDL Studio and GroupShare. The focus here was also on ‘cloudability’: features that are (now or later) suitable for the Language Cloud will be preferred during development. The noble goal is to eventually bring the tool ecosystem together to such an extent that it can be used in the cloud as modular as possible. But this will take a few more years – also in SDL’s opinion. 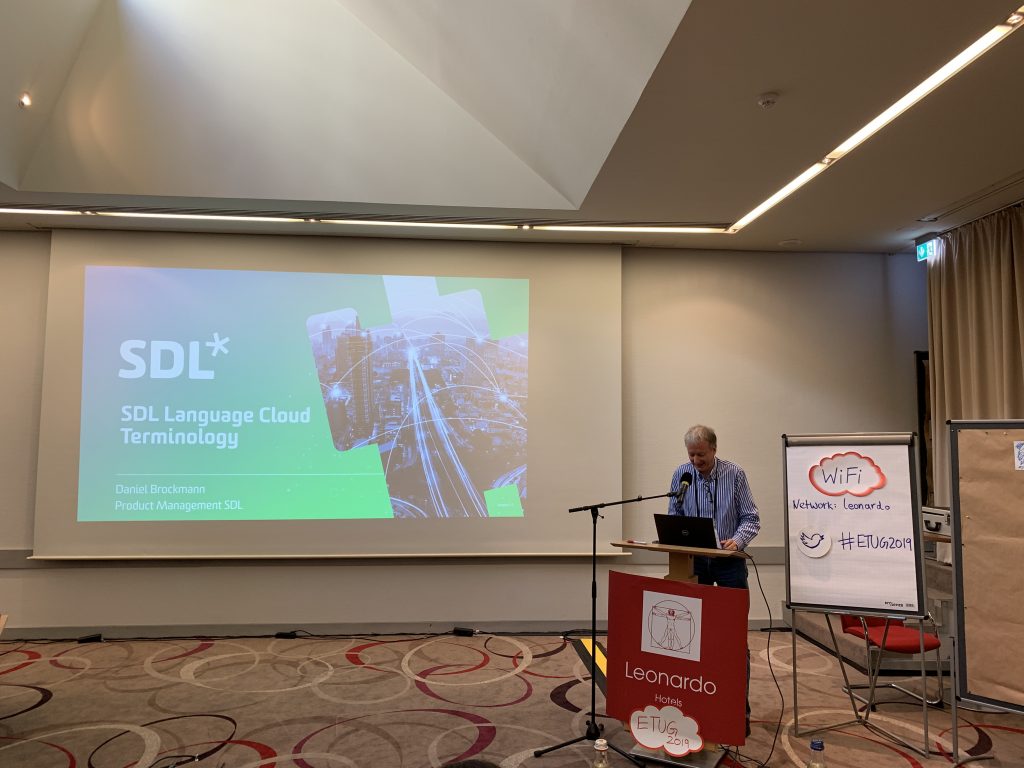 Daniel Brockmann from SDL on terminology in the SDL Language Cloud

APIs and SDL AppStore were presented this time by Florentina Caputa who focused on GroupShare Webhooks. Webhooks ensure that applications, such as GroupShare, transmit information about certain events to their users via third-party applications. For example, events in GroupShare can be reported via Webhooks in Slack. This has the advantage that users do not have to be permanently in GroupShare to know if something relevant happens.

Shirley Coady introduced us to SDL’s plans for the recently acquired MultiTrans. She was very excited about SDL’s acquisition because now the software is being given the full attention it wasn’t getting from its previous owner R.R. Donnelly. MultiTrans is particularly interesting for SDL users with very high security requirements, because it enables particularly secure translation processes. SDL already has a number of plug-ins and is working on other solutions to further integrate MultiTrans into the SDL product family.

Richard Wendt then showed us what SDL Professional Services can do for SDL users and how they work in general. In the ensuing discussion with the plenum, it became clear that there are still problems regarding the interface (e.g. to support). Here you can see again how important communication with users and knowledge management are.

A new baby was also presented: BaccS. Paul Filkin showed us what the new SDL Business Management System is already capable of and what is on the road-map for the coming months. Impressive, we are curious to see which administrative gaps the tool will ultimately be able to close and for whom.

Eva-Maria Förster gave us some insights into the terminology work of the Federal Ministry for the Environment which is due to reasons of security still happening ‘cloud-less’ albeit new terms constantly being demanded by all sorts of bodies.

Klaus Fleischmann from Kaleidoscope introduced us to terminology as central part of all processes and how it can be managed in a lean way by new features of MultiTerm-WF aka. quickTerm. This also includes the creation and management of Concept Maps, on which Jenny Seidel had a special presentation.

According to Daniel Brockmann, who showed what MultiTerm is like in concrete terms, Kaleidoscope is busy providing features that will benefit a small but fine group of users in the SDL universe. The plenum also raised the question of how SDL and Kaleidoscope will harmonize in the future as more and more functionalities migrate to the cloud. Brockmann wouldn’t see any problems facing companies and users: they are constantly exchanging and treating all matters openly.

Our very own Jenny Seidel gave some insight into Concept Maps and their multiple facilitating character for a company’s life: for terminologists, authors, customers and employees alike. Concept Maps show the connections and inter-dependencies of terms and thus a conceptual world in which you can always be as detailed as needed and still retain the connection. 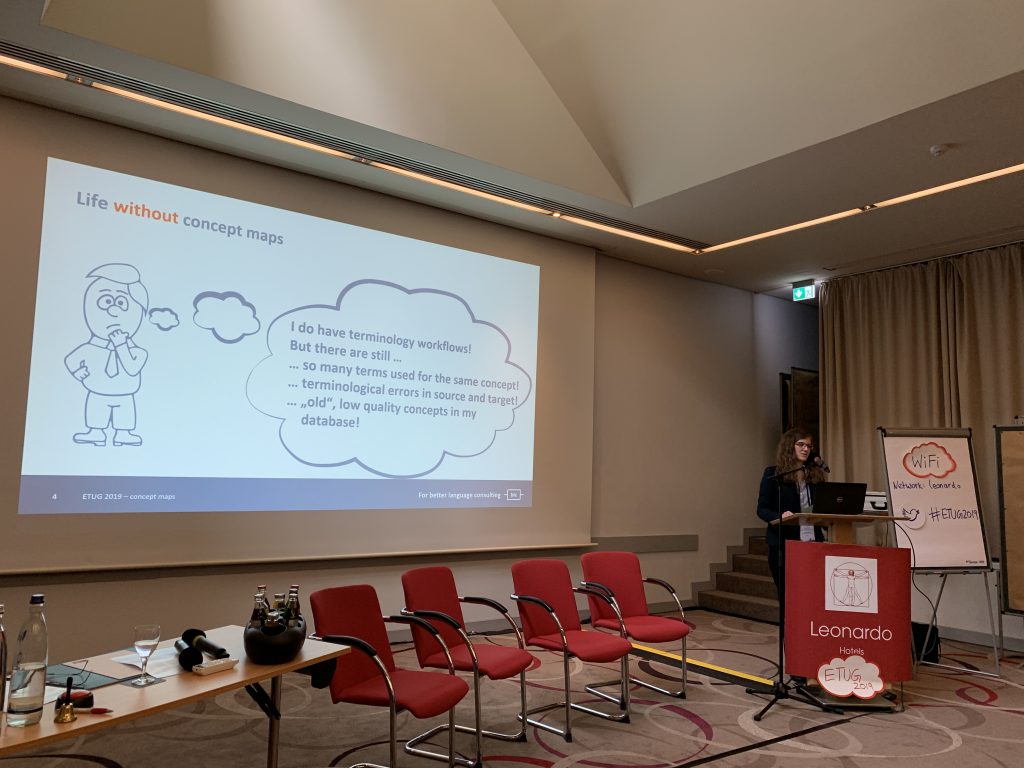 Jenny Seidel on a life with and without Concept Maps

The 1001 languages of Europe

Very interesting and entertaining was the presentation of Evelina Dimova from DG TRAD – PreTrad Unit of the European Parliament. She showed in a lively and detailed way the complex pre-processes every translation job must undergo (key word: spaghetti-process). We’d say: admiration for this process-design, the variety of languages and the volume. And we also love your spaghetti-chart, Evelina 🙂

We all need a little fun!

After a delicious lunchbreak we had a brief quiz in order to overcome food-coma. Finally our good mustard from Düsseldorf was called into action! What’s in both the lion and translation technology? Right, the CAT (Computer Assisted Translation). The finder of the CAT on one of the mustard-glasses was granted a box of real Düsseldorf pralines. Congratulations from the whole blc-team 🙂

Due to the high demand we spent the evening exploring the artsy side of Düsseldorf with Joe Martine. He showed us the realistic sculptures on top of advertising pillars (Säulenheilige – Stylites) that are spread all over the city center. Our walk ended at the Vente where Joe Martine drew all attendees after a delicious dinner in his very own way. But make up your own mind: 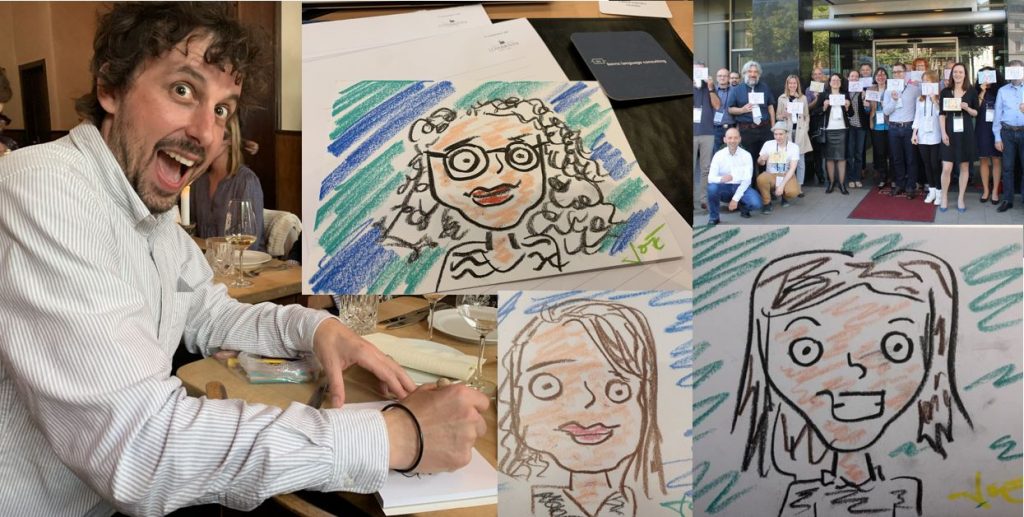 During dinner Joe portrayed about 50 guests!

Looking into the future

There was a longer discussion about how we want to deal with the “Ideas”. SDL Ideas are suggestions from users on new features or changes. Currently the ETUG ideas are managed via a hard-to-find ETUG-page and this year only very few ideas were received. But all agreed on thinking about allowing the ETUG-members to vote on the procedure.

The GDPR-compliance discussion that followed was somewhat brief but the majority of those who took part were of the opinion that they were not processing any personal data that could evoke compliance-problems. It remained unclear who was when officially in charge of the safety of personal data (e.g. translation meta data). We think that all systems and processes should be designed in such way that data is stored safely and can be deleted on demand (privacy by design).

WANTED: The ETUG Steering Committee is looking for reinforcement

After pestering the SDL Team in the Q&A-Session (Thanks for your honesty, guys!) there was some administrative stuff to discuss: We debated on how to put ETUG-Ideas back into the spotlight and how to restrengthen the user group in order to place demands on SDL like back in the old days. Also the Steering Committee and the host (that’s us) were thanked for organizing this year’s ETUG (Thanks back to you for your attendance!). And there was a plea to reinforce the Steering Committee in order to be able to follow-up on topics more. So here comes the call: ETUG-members, join the committee! We are stronger together, we can achieve more together! If you’re interested in participating, refer to the current Steering Committee: Laurent Pierret, François Filandre, Laurent Gottardo, Ralf Lemster and Kerstin Berns.

Last but not least: We are very happy that everything worked out so well while at the same time being a little sad. We had so much fun to host ETUG! We’re looking forward to next year’s ETUG in beautiful Vienna hosted by IAEA. Wiener Schmäh (Viennese dialect) instead of Düsseldorfer Platt :-). It’ll be great! 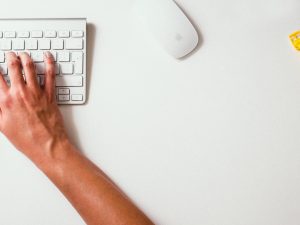 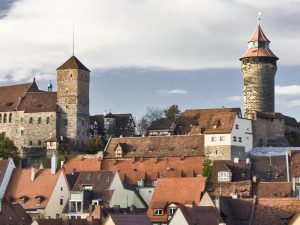