Just a few days before the Christmas festivities, SDL came forward with new versions for Trados Studio and MultiTerm. We have prepared an overview of the most exciting features for you. So what’s new and improved in SDL Trados Studio 2017 and SDL MultiTerm 2017? Read on!

Using the upLIFT technology, Studio has learned to find matches in your translation memory even if there are no ordinary fuzzy matches. In that case, your TM repositories are scanned for segment fragments – similar to the concordance search, with the distinct difference that the search is immediately started in the background and the results are shown directly in a separate window and while writing in AutoSuggest. Naturally, the use of upLIFT mostly makes sense for large TM databases since you have much better chances for finding lots of fragments. That’s why the technology is only available for TMs having at least 1,000 segments.

Besides, upLIFT can also be used to optimize fuzzy matches. For example, if you’ve got a fuzzy match that’s one word away from a 100% match, Studio searches through the available resources (TM, termbase, MT system) for this exact word and adds it via the upLIFT Fuzzy Repair feature. It spares you the effort of looking the word up and thus speeds up the translation work on the whole.

SDL’s Language Cloud (MT) is another area where cumulative learning is used to maximize benefits for the user. The MT engine with AdaptiveMT technology can now use the post-editing phase to learn which mistakes should be avoided during the next translation. In this way, the post-editor’s corrections simultaneously serve for MT training purposes. Data are processed in real time, meaning that the MT engine applies the corrections to the very next segment. AdaptiveMT can currently be used for translations from English into German, French, Italian, Dutch and Spanish. Further language pairs will be added with time.

With each new version, SDL tweaks its software to allow for a more user-friendly experience. With Trados Studio 2017, you can create a quick preview of the selected document via the data type settings, so you can see how the document will be processed in Studio without having to import it first. Another nifty feature has been added to the Welcome view: you can now directly drag and drop the documents you want to translate.

Frequently used languages are now automatically put on top of the list during project creation so that you can spare a few precious seconds each time you need them. Sentences containing hard line breaks and thus divided into several segments by Studio can now be joined to a single segment. User-defined filters have been revamped and can now combine several criteria and stored for later use. Info on further improvements in SDL Trados Studio 2017 can be found on the SDL website.

Those of you who regularly work with terminology databases know how tedious and highly manual this task can be. The new Batch Tasks are meant to speed things up a bit. You can now define a batch task for finding and replacing text in a termbase, in certain languages or just in specific fields. You can also create filters or make use of regular expressions. Alternatively, you can delete several term entries which have been filtered after your criteria.

What’s more, the default layout has been given a good overhaul. Instead of processing entries via the Edit button or struggling with other intricate functions, you can now do your editing inline or via prominent mouseover buttons. This will definitely help you add your term information faster and much more intuitively. 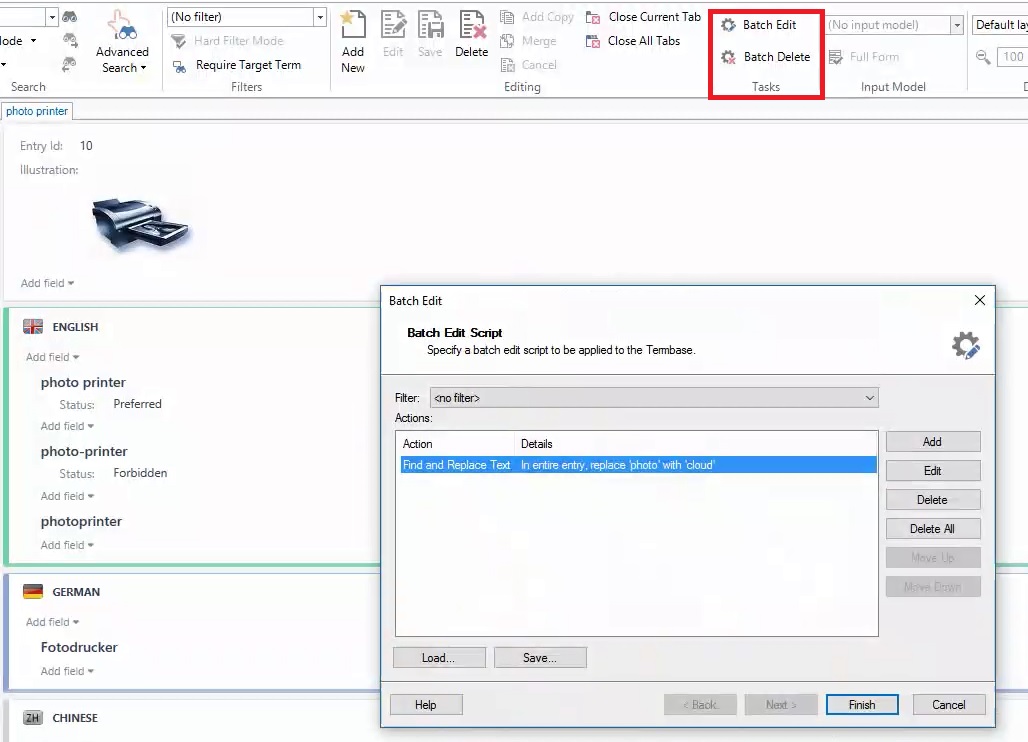 SDL GroupShare 2017 isn’t out yet but it is sure to have a lot in store for us. Until now, GroupShare projects were created in Studio and then synchronized with the project server. SDL GroupShare 2017 will no longer be available only via desktop. The project creation and all project management tasks will have been moved to the browser. Besides, MultiTerm Administrator is now part of the SDL MultiTerm 2017 package and won’t have to be purchased separately. MultiTerm Administrator is primarily needed for configuring the GroupShare terminology server.

We are looking forward to trying out SDL GroupShare 2017 and will, of course, keep you posted!